The Gaystapo sets its sights on science 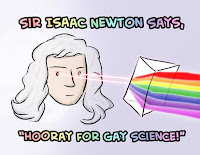 
Why Is Science So Straight?

Many years ago, over lunch at our university cafeteria, I came out as gay to a colleague in the engineering department. “I didn’t realize you were so unconventional,” he said. I tried explaining to him that being gay was innate and had nothing to do with wanting to subvert convention, but he refused to retract his label. Looking back, perhaps he was correct.

For I had violated an unspoken convention of STEM (science, technology, engineering and mathematics): the invisibility of its L.G.B.T. members.

After the lavender blitzkrieg on marriage, neighboring territory needs to be conquered. The Gaystapo won't settle for just Czechoslovakia. The scientific profession, populated as it is by university-coddled politically-correct cowards bent over at the public trough, is a juicy next target, for more reasons than the obvious.

This is just what science needs--affirmation of cis-transgender queer empowerment to transgress the social construction of heteronormative pedagogy in the laboratory. Finally science will be liberated from breeder oppression and the LGBTQQIP2SAA community will assume their rightful place at the vanguard of science.

Not too many years ago, scientists with homosexual orientation tried like hell to keep their personal lives out of their professional lives--Alan Turing comes to mind.

I'm actually not so opposed to making the sex of the person you like f*cking a primary criterion of scientific achievement. It would cap decades of moral degeneration in the scientific profession, and subject the largely leftie-politically correct scientific community to the cultural degradation and chaos they have helped to bring to the rest of America.

The only thing I ask of the vanguard tunnel testers is this: please, pleeeeese, invade evolutionary biology first. After all, evolutionary biologists have been peddlin' this cis-heteronormative anti-homo-bi-trans-oppressive "natural selection" for a century, and it's time that queer theory is applied to punctuated equilibrium.

I'd pay money to watch.