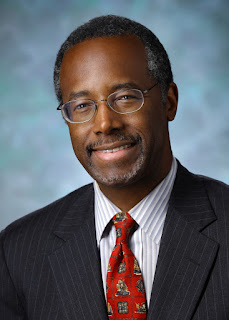 One very good piece of political news is that Ben Carson is rising rapidly in the polls, and is challenging Trump in some states.

This scares the piss out of Democrats:

Why Ben Carson’s rapid surge in the polls should have you very, very worried


Heh. If I were a libtard, I'd be very worried about Carson.

I know Ben personally, and he is the real deal. He's brilliant, a real gentleman and genuinely nice person. He's honest, and devout.

He is a Democrat nightmare.

Democrats depend on 90% of the minority vote to win national elections. Without it, no Democrat will ever again win a national election. That's the main reason Democrats have been deliberately ginning up the riots and the racial violence and the cop killing--they need a frightened enraged black community to get their votes.

Ben is the antidote for Democrat race-baiting.  He is a real conservative, with superb economic and social policies, and he would do wonders for racial reconciliation in America. He's the anti-Sharpton and the anti-Obama.

Ergo, Democrats hate him and are terrified of him. If he gets the nomination (and I think he has a real chance), Democrats will use herculean creativity to try to destroy him. They will need to do their usual chop job on a black conservative (they're still trying to lynch Clarence Thomas), but they will have to do it while at the same time not alienating millions of black voters who rightfully respect and love Carson.

I don't think the Dems can pull it off. It would be something to watch--a modern attempt at lynching by the Party of Lynching--but I think Ben can come through it with his deep integrity and decency.

I pray for him. He'd make a great president.
Posted by mregnor at 9:11 PM