Democrats have been busy solving the problem of too little crime 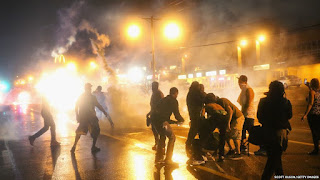 Lloyd Green at The Daily Beast:


Welcome to the 90s. Crime Is Back: Will the Spike in Help the GOP?

High crime is good for Republican political prospects—and, with murder rates increasing nationwide, that should have Democrats worried about 2016.

From New York to Chicago, Baltimore to New Orleans, and Milwaukee to Dallas, the hydra-headed scourges of crime, murder, and mayhem have returned. And as the country hurtles towards 2016, this grim reality could prove to be a political nightmare for the Democrats. But, for the Republicans, crime represents a well-trodden pathway to power.
Let me explain. As in 1968, crime again stands to dislodge the Democrats from the White House, in the same way that in 1988 crime helped propel George H.W. Bush to Ronald Reagan’s third term.

Look around—history can repeat itself. This past week, three men gunned down police Lt. Joe Gliniewicz in the President’s adopted home state of Illinois, even as people were mourning the execution-style killing of Darren Goforth, a Harris County Texas Sheriff’s Deputy.

Yet Obama and his party appear helpless, hostages to the same demographic forces they courted, and then rode to power. Having staked their future on the volatile axes of race and income, the Democrats are now witnessing crime reemerge as a campaign issue, and they are out-of-touch and ill-prepared, to say the least.

While America’s law-abiding taxpaying middle class was looking at all this in horror, the best that Obama could muster was a statement that, “Targeting police officers is completely unacceptable—an affront to civilized society,” and a phone call to Deputy Goforth’s widow. The President’s response felt nonchalant, lacking the urgency of now that the Justice Department poured into Ferguson.

Meanwhile, the Democratic National Committee was spending its time and political capital on a resolution embracing the Black Lives Matter movement. Even in the midst of the blood and the din, it was all about the base.

And the money quote:

Please read the whole thing. Green is remarkably candid about the political consequences of the Democrat crime wave, and he's quite close to admitting that the crime wave is a deliberate policy on the part of the Democrats to stimulate their base.

But there's an astonishing aspect to the essay that's easy to miss if you don't step back and look at it.

The Democrat crime wave of 2015 isn't primarily a political catastrophe. It's a human catastrophe--hundreds of people--mostly young black men--are being slaughtered in this abattoir of political calculation.

For goodness sakes, Democrats, your political tactics are killing people.

In a very real sense, the Democrat Crime Wave of 2015 is a metaphor for the Democrat Party's consistent strategy for 200 years: kill as many blacks as you have to to get out the vote.

The worst thing that can happen to a black man in America is to be governed by a Democrat. Destroying black lives is core tactic of Democrat politics. And liberal Democrat shills like Lloyd Green hew to form--Green describes Democrat incitement to slaughter as a political tactical faux-pax rather than a deliberate criminal atrocity perpetrated by America's largest political party against our citizens, and especially against our black citizens.

The perennially dumbf*ck American electorate needs to learn this: electing Democrats is like playing Russian roulette with a fully loaded revolver. No matter how high your hopes, someone always dies.
Posted by mregnor at 9:28 AM