Ed Brayton says I've had a bit too much to think 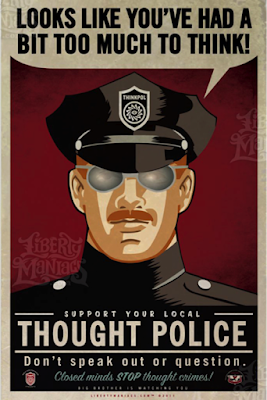 I pointed out that selective enforcement of the law was commonplace among Democrat elected officials--Obama's presidency could basically be defined as "six years of selective enforcement of the law". If choosing which laws to obey and which to flout were worthy of jail time, Obama (immigration law, IRS law, Obamacare law, classified information law, yada, yada...) would be facing several millennia in federal prison.

The rule of law has been a joke to Obama and his far left comrades. Why jail a Christian clerk for enforcement "discretion", when myriad high-level miscreants abound?

Brayton's gaystapo readership flailed and spat. A taste of the culture war was too much for Dispatches from the Culture Wars crowd, so Brayton banned me.

It was delicious. Funny how real life plays out--in a culture war over censorship and lies, libtards can really do nothing but censor people who call out the lies, and put them in jail if they persist.

Brayton and his gaystapo are welcome to comment here--without censorship. I doubt the thought appeals to them, because on this blog, and in conservative circles, they can't use force.
Posted by mregnor at 1:33 PM