The mistake conservatives make about the Pope 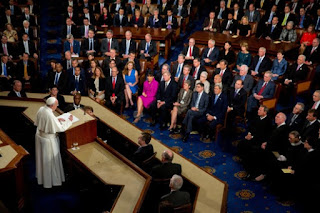 I'll try to blog in detail on the Pope's visit and speech shortly. Short version: I love his address to Congress. One of the most beautiful speeches I've heard. He is right about everything in the speech. I ask my conservative friends to wait before they blow a gasket.

Just a brief note on a comment by my friend Ilion:


I'm sorry, Michael, but this pope is a fool, top to bottom, and he is a socialist (and he seems to be a Marxist, at least a "soft" one) ... just as almost all "intellectual" Catholics are. And while I do understand your very human impulse to put his deeds and words in the best light, you risk making yourself a fool if you go too far in doing this.
The sad fact is that there is in Catholicism a profound hatred, or at least fear, of general human freedom. This is why, for example, Catholics are always at the forefront of laying false charges against capitalism; for capitalism is just the natural result of human freedom with respect to one's labor and the fruit of one's labor.

I respectfully disagree. Pope Francis is certainly a fool--a fool for Christ, in the Pauline sense. The battle the Holy Father is engaging is a spiritual battle, not a political battle. Working for the common good, love and respect for the vulnerable, the weak, the poor, and sinners is basic Christian life. Living one's life in accordance with Matthew 25 is not socialism. Care for the poor is not Marxism, soft or otherwise.

Conservatives make a horrible mistake to create an idol of political ideology. That's what liberals do, and it is ultimately satanic, literally. Satan, as Rene Girard has pointed out, is an imitator. He imitates Christian charity to wage spiritual war on mankind--that is a particularly succinct definition of liberalism and its socialist and Marxist congeners.

Socialism is the (satanically inspired) imitation of Christian charity.

This is the conservative mistake: by denigrating Christian charity as so beautifully expressed by the Pope, we abandon all the best motives and works of man to the Left. I can't imagine a more unwise thing a conservative can say than: "all the stuff the Pope is saying about love and respect and human decency is socialist".

Why not just hand the socialists the victory trophy right now and get it over with?

Goodness gracious, Satan pops a champagne bottle every time a conservative says such things. Hell's agenda is this: to portray evil as good, and good as evil. To equate the Pope's entirely Christian exhortations--exhortations that come right out of the Lord's words in the New Testament and right out of 2000 years of Catholic magisterium-- with evil is to do the devil's work for him.

Conservatives are the natural defenders of Christian culture. Conservatives should enthusiastically embrace the Pope's beautiful exposition of Christian morality. I believe that the Pope is (very shrewdly) proving to be the Left's worst enemy, because he's taking back Christian charity from Marxists and socialists and liberals who have expropriated it for ends that are plainly evil.

Conservative values--freedom (the freedom to work towards God's purposes for our lives), hard work, respect for the natural world, rule of law, centrality of the family, traditional marriage, chastity--are the means to achieve the ends of Christian charity, an end so eloquently evoked by the Holy Father in his breathtakingly beautiful speech.
Posted by mregnor at 8:26 PM