Wonder why Ben Carson is missing in liberal polls? 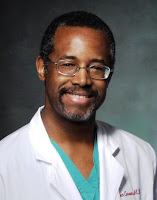 Yesterday we took a look at that new NBC News / Marist poll out of New Hampshire and Iowa which had the cable news talking heads all excited for a few hours. It was a pretty good poll as these things go and certainly contained plenty of information relevant to the current state of the race heading into the next GOP debate. But having had a while to ponder the findings I noticed something odd. They’re polling pretty much the entire relevant field in both parties when it comes to the primary battles, but when they go to the hypothetical matchups for the general election, isn’t there somebody missing?

Just as a reminder, they put up the allegedly full results on scribd.com for Iowa and New Hampshire. As you’ll see toward the end of the questionnaire they matched up Hillary Clinton and her chief contender, Bernie Sanders. Those are natural choices, of course. (They tossed in Biden as a wild card in some spots since he’s drawing a lot of headlines this month.) And they put them against Trump which is also a no brainer since he’s the frontrunner pretty much everywhere. But where is the matchup between Hillary and Ben Carson? Or any Democrat and Carson for that matter? The guy is in a virtual tie with Trump in Iowa in some polls (22% in this one) and ranks very high among the rest of the field in New Hampshire.

Instead, they skipped several slots in the Iowa GOP standings and pitted Clinton against… Jeb Bush? You skipped the guy raking in 22% of the support to go with the guy polling at 6%, folks. What’s up with that? And to top it off, instead of going with Bernie Sanders, you next put Trump and Bush against Joe Biden who isn’t even in the race.

Democrats have a long history of excluding blacks from elections--as voters and as candidates. It's no surprise that Carson becomes an Invisible Man now that he poses a threat to the Democrat plantation.

Democrats are terrified of Carson. Terrified. A brilliant, charismatic, honest, conservative, devoutly Christian black man is the Democrats' primal fear. Look what they did to Clarence Thomas--they tried a high-tech lynching that almost worked.

A few years after the bullshit lie about Thomas and a public hair on a can of coke, the ever morally upright Democrat party elected Bill Clinton to the presidency.

Democrats haven't devised a stragegy againt Carson yet, so it's better to make him disappear for now. Should he continue rising in the polls--and I think he will--the Party of Slavery and their media servants are going to have to come to grips with their worst nightmare.

It will probably be very ugly--think Anita Hill with a million times the stakes--but Ben is gonna be hard to lay a glove on.

The fact that he's been left out of the polling is evidence of the Democrat panic his candidacy evokes.
Posted by mregnor at 2:42 PM