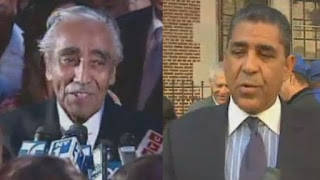 The ballots of 32 precincts are missing, as well as several thousand affidavit ballots and absentee ballots.

Rangel, the recent Democrat chairman of the House Ways and Means Committee, was convicted and censured in 2010 by Congress for 11 counts of unethical solicitation of money, improper use of House resources in solicitation, and tax evasion.

Rangel is one of the most senior Democrats in Congress and was chairman of the committee that handled... tax law.

Rangel initially appeared to win the primary election last week handily, by 20 points, but the appearance and disappearance of ballots from entire precincts in this all-Democrat congressional district has thrown the election into disarray.

'We have dead voters voting more than twice, which is illegal" said Democrat campaign strategist Percy Tammany. "We've petitioned election officials to monitor the post-mortem vote much more carefully". Tammany also noted that some voters seemed to be residents of other states, and not eligible to vote in New York. "M. Mouse and D. Duck are obviously residents of Orlando, not New York, and the thousands of ballots cast in their name should be excluded. They've already voted in Florida".

National Democratic Party officials expressed no surprise at the maelstrom in the New York 13th district Democrat primary. "Electoral 'adjustments' have been the purview of the Democrat party for a couple of centuries" noted Bill Acorn, National Director of Cemetery Outreach for the Democratic National Committee. "We're the professionals when it comes to 'electoral enhancement'."

The only problems that arise, Acorn notes, is when Democrats run against Democrats. "It's hard enough for deceased Dems to decide who to vote for in a general election. But when both candidates are Democrats, Democrat voters are even more brain-dead. How do we steal an election from ourselves?"

The winner of the Rangel-Expaillat race remains to be announced. Democrat party officials are expected to meet privately on Wednesday to determine the election result.

The winner of the election will be announced as soon as the cheques clear.
Posted by mregnor at 6:00 AM