You can't make this stuff up.

NASA, an agency as incompetent (and corrupt) in climate science as it has been skillful and professional in space flight, recently issued this hysterical release: 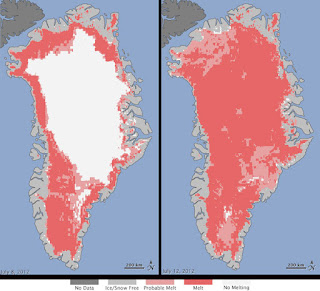 For several days this month, Greenland's surface ice cover melted over a larger area than at any time in more than 30 years of satellite observations. Nearly the entire ice cover of Greenland, from its thin, low-lying coastal edges to its two-mile-thick center, experienced some degree of melting at its surface, according to measurements from three independent satellites analyzed by NASA and university scientists.

On average in the summer, about half of the surface of Greenland's ice sheet naturally melts. At high elevations, most of that melt water quickly refreezes in place. Near the coast, some of the melt water is retained by the ice sheet and the rest is lost to the ocean. But this year the extent of ice melting at or near the surface jumped dramatically. According to satellite data, an estimated 97 percent of the ice sheet surface thawed at some point in mid-July.

Researchers have not yet determined whether this extensive melt event will affect the overall volume of ice loss this summer and contribute to sea level rise.

"The Greenland ice sheet is a vast area with a varied history of change. This event, combined with other natural but uncommon phenomena, such as the large calving event last week on Petermann Glacier, are part of a complex story," said Tom Wagner, NASA's cryosphere program manager in Washington. "Satellite observations are helping us understand how events like these may relate to one another as well as to the broader climate system."

Son Nghiem of NASA's Jet Propulsion Laboratory in Pasadena, Calif., was analyzing radar data from the Indian Space Research Organisation's (ISRO) Oceansat-2 satellite last week when he noticed that most of Greenland appeared to have undergone surface melting on July 12. Nghiem said, "This was so extraordinary that at first I questioned the result: was this real or was it due to a data error?"


Sounds pretty terrible. Must be another manifestation of the Global Warming Climate Change Climate Instability Apocalypse.

Run for your lives!

Here's the penultimate paragraph of the article:

"Ice cores from Summit show that melting events of this type occur about once every 150 years on average. With the last one happening in 1889, this event is right on time," says Lora Koenig, a Goddard glaciologist and a member of the research team analyzing the satellite data. "But if we continue to observe melting events like this in upcoming years, it will be worrisome."

But nothing is amiss.

So why the alarmist press release? Why use the word "unprecedented" in the headline? Why wait until the end of the press release to point out that the melt is cyclic and normal? Heck, why show the ice-less terrain of Greenland in red? Could it be to make it look really scary?

The only defense these "scientists" have against an accusation of fraud would be the claim that they are too stupid to impute premeditation.
Posted by mregnor at 6:00 AM