“No, my husband’s hands were tied, not yours.” 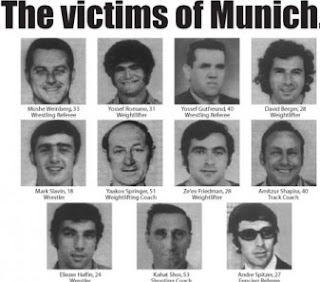 Benjamin Weinthal has a superb essay about the International Olympic Committee's refusal to permit a minute of silence to honor the eleven Israeli athletes murdered by Muslim terrorists in the Munich Olympics in 1972.

Why Did the IOC Refuse to Honor the Munich Victims?


The International Olympic Committee (IOC) flatly rejected a minute of silence at today’s opening ceremony in London to mark the 40th anniversary of the murder of eleven Israeli athletes by Palestinian terrorists at the 1972 Munich Games.

Why exactly is the IOC opposed to a rather modest attempt to commemorate the victims of terror? According to Ankie Spitzer, the widow of Israeli fencing coach Andre Spitzer, who was murdered by the Palestinian Black September group in 1972, IOC president Jacques Rogge capitulated to the 46-member bloc of Arab and Muslim countries because of the threat of Arab countries to boycott participation in the Games.

Spitzer, who jumpstarted an international campaign to garner a minute of silence at the London games, reported that Rogge told her that “his hands were tied” by the influence of the 46-member group.

Her rejoinder to Rogge: “No, my husband’s hands were tied, not yours.”

Spitzer claims that the IOC balked because 21 Arab delegations are prepared to leave the Games if a public commemoration event took place. Her response to the IOC: “Let them leave if they can’t understand what the Olympics are all about — a connection between people through sport.”

Predictably and unsurprisingly, Jibril Rajoub, head of the Palestinian Football Federation, praised Rogge’s decision in a letter, writing “Sports is a bridge for love, connection and relaying peace between peoples. It should not be a factor for separation and spreading racism between peoples.”

Meanwhile, in a case of real ICO-sponsored racism and anti-Semitism, the IOC permitted Lebanon’s Judo team to boycott training alongside the Israeli team. According to the London-based Jewish Chronicle, “Olympic officials were forced to erect a special screen at the Excel venue following a complaint from a member of the Lebanese delegation.”

What is unfolding in London is a mirror-image of the conduct of the United Nations and its organizations seeking to not hurt the” feelings” of Muslim-majority countries. In short, mass cowardice prevails over basic human rights and confronting terrorism.

Moreover, the Obama administration’s ongoing refusal to invite Israel to participate in the U.S.-sponsored Global Counterterrorism Forum is part and parcel of the soggy indifference toward Israel’s security interests, this time at the expense of placating Turkey.

In one of the most insightful commentaries on the failure of left-liberals to tackle pressing human-rights issues, the Wall Street Journal columnist Daniel Henninger neatly captured in his May article a new phenomenon. He wrote that “the Liberals and Democrats who work on human-rights issues won’t like to hear this, but with the Obama presidency, human rights has completed its passage away from the political left, across the center and into its home mainly on the right — among neoconservatives and evangelical Christian activists.”

All of this helps to explain why conservatives have played a key role in the call to remember the murdered Israeli athletes and have consistently urged the Obama administration to include Israel in its Global Counterterrorism Forum.

The London Olympic Games will run 24,480 minutes. As for the International Olympic Committee's refusal to offer even one minute for a brief tribute to the athletes murdered by Muslim terrorists 40 years ago in Munich, there's no need for an exhaustive analysis.

The athletes were Jews.
Posted by mregnor at 6:00 AM