"... a verification of a prediction made by evolution" 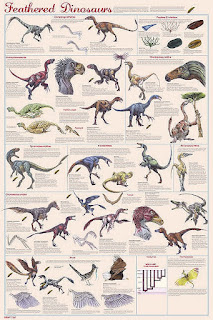 Steven Novella has an amusing post in which he discusses the recent discovery of a dinosaur with proto-feathers and reviews the evidence that modern birds are related to dinosaurs. Interesting stuff, for sure, and very important for our understanding of dinosaurs and of the origin of birds.

But, predictably, when it comes to evolution Novella can't contain himself:

The story of feathered dinosaurs is one of the strongest success stories for evolutionary theory, and continues to be a thorn in the side of evolution deniers. They cannot help but expose their ignorance and deception when they clumsily try to deny the implications of feathered dinosaurs. So I tend to revel, just a bit, in each new significant discovery of a feathered dinosaur. The latest discover, recently published in PNAS, provides evidence that feathers were even more common among dinosaurs than previous evidence demonstrated. There is some debate among experts about how prevalent protofeathers and feathers were, and so a new piece of solid fossil evidence helps clarify the debate further.

After Darwin published his theory of evolution one of the early challenges to the idea of evolution, which includes the claim that all life on earth is related through common ancestors, was that there were significant gaps between major groups of living creatures. Birds, for example, seem to be their own group without a close connection to any other group. They are, of course, related to vertebrates. But if evolution were true then there must be fossil evidence connecting birds to another group, such as reptiles...

Creationists are stuck arguing that it is nothing but a coincidence that the group hypothesized to the related to modern birds is turning out to have feathers and protofeathers as a common feature. Nothing changes the fact, however, that this is a verification of a prediction made by evolution. The ability to successfully make predictions about what will be discovered in the future is powerful vindication for any scientific theory.


Now I believe that the hypothesis that birds evolved from dinosaurs is well-supported, although there certainly remains some controversy. It's interesting and good science.

But what to make of Novella's bizarre assertion that such evidence is a triumph for evolutionary theory?

For a century after Darwin published Origin the established wisdom was that dinosaurs were closely related to reptiles (-sauros means "reptile" or "lizard"), and that birds were descendants of thecodonts, which were "socket-toothed" reptiles that flourished in the Triassic. In the later 20th century, anatomists and paleontologists and cladists and comparative biologists established striking similarity between the bones of some dinosaurs and modern birds. Feathered and proto-feathered fossils of dinosaurs, discovered with increasing frequency in the late 20th century, made the relationship even more clear.

... this is a verification of a prediction made by evolution. The ability to successfully make predictions about what will be discovered in the future is powerful vindication for any scientific theory.


But "evolution"-- Novella means Darwinism-- predicted none of this. I challenge Novella to cite references from evolutionary biologists during the past 150 years predicting that birds rather than reptiles would be found to be related to dinosaurs based on Darwinian principle of heritable variation and natural selection and common descent.

While T. H. Huxley was an early proponent of the dinosaur-to-bird theory, he based his view on morphological similarities and paleontological evidence, not on any insight gained from 'random variation and natural selection'. And his view was rejected-- in favor of the dinosaur-reptile theory-- by the Darwinist-monopolized evolutionary community for 100 years.

That's hardly a successful "prediction made by evolution".

The only thing evolutionary theory "predicted" was that living things descended from a common ancestor. That's as far as "random variation and natural selection" gets you. Darwinian principles don't distinguish between dinosaur-bird relatedness and dinosaur-reptile relatedness.

And what Darwin really offered was not really a prediction, but an explanation, for relatedness. The explanation was common ancestry. Discernment of actual relatedness depends on morphological similarities, the fossil record, etc, and not at all on Darwin's theory. The real work in unraveling the fascinating relationship between dinosaurs and birds has been done by the anatomists and the paleontologists and the cladists and the comparative biologists. 'Chance and necessity' doesn't tell you whether your ancestors had feathers or scales. Careful morphological and paleontological work tell you.

That's the real science, and it depends not squat on non-existent Darwinian "predictions".

If the anatomists and the paleontologists and the cladists and the comparative biologists had published evidence that dinosaurs were the progenitors of reptiles, instead of birds, Darwinists would have touted the indispensability of evolutionary theory in establishing the dinosaur-reptile relationship.

Another successful prediction by evolution!

Darwinism is never wrong, because banal observations (living things vary heritably) and tautologies (survivors survive) are never wrong.
Posted by mregnor at 6:00 AM