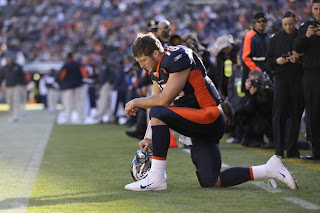 Michael Medved has a fine post on public displays of gratitude to God.

The musical manuscripts of Johann Sebastian Bach show him writing the initials "SDG" at the beginning and end of all of his some 300 church compositions, as well as attaching the same abbreviation to many of his immortal secular works. The initials stand for soli deo gloria ("to God alone be glory"). No one assumes that Bach expressed these sentiments to imply some divine favoritism for his music above contributions by his less religious friend and rival, Georg Philipp Telemann. Instead, Bach humbly acknowledged the creator as the ultimate originator of his miraculous creativity, much as a distinctly blessed athlete in our century might acknowledge the almighty as the true source of his own health, power and skill.

The argument against injecting blessing and praise into what Rabbi Jacobs calls the "fleeting trivialities of popular culture" maintains that association with such ephemera actually diminishes our sense of the divine. But the other side insists that expressions of appreciation to a higher power help place even our silliest earthly endeavors in proper perspective, without any alteration of our perceptions of God.

If a champion wins an Olympic medal, an Oscar, a Super Bowl, or even a significant political campaign, and celebrates the triumph with invocation of the almighty's reign, that victor doesn't claim supernatural favor but rather recognizes mortal limits to his own power. When the most admired public figures take time to express gratitude and share credit, it suggests an admirable quality of humility that remains in short supply in celebrity culture and the nation at large.


I agree. Unashamed public expression of gratitude to God enrichs our lives and our culture. I thank God regularly, to myself. I should probably have the courage to be more explicit about it.

Thanking God is the most appropriate kind of gratitude, as it tells the truth about who we are and the truth about to Whom we owe our blessings, our trials, our lives and our love.
Posted by mregnor at 6:00 AM