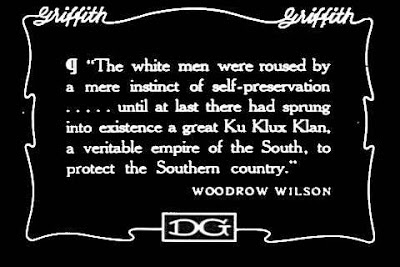 American's first Progressive (i.e. Liberal) President, Woodrow Wilson was a great admirer of the Ku Klux Klan, and lent a line from his own textbook A History of the American People to D.W. Griffith's movie Birth of a Nation.

D. W. Griffith's The Birth of a Nation glorified the original Klan, which was now a fading memory. Griffith's film was based on the book and play The Clansman and the book The Leopard's Spots, both by Thomas Dixon who said his purpose was "to revolutionize northern sentiment by a presentation of history that would transform every man in my audience into a good Democrat!" [emphasis mine]

The film created a nationwide craze for the Klan. At a preview in Los Angeles, actors dressed as Klansmen were hired to ride by as a promotional stunt, and real-life members of the newly reorganized Klan rode up and down the street at its later official premiere in Atlanta.

In some cases, enthusiastic southern audiences fired their guns into the screen. The film's popularity and influence were enhanced by a widely reported endorsement of its factual accuracy by historian and U.S. President Woodrow Wilson as a favor to an old friend. Much of the modern Klan's iconography, including the standardized white costume and the burning cross, are imitations of the film, whose imagery was itself based on Dixon's romanticized concept of old Scotland rather than on the Reconstruction Klan.

The Birth of a Nation includes extensive quotations from Woodrow Wilson's History of the American People, e.g., "The white men were roused by a mere instinct of self-preservation ... until at last there had sprung into existence a great Ku Klux Klan, a veritable empire of the South, to protect the Southern country." Wilson, on seeing the film in a special White House screening on February 18, 1915, exclaimed, "It is like writing history with lightning, and my only regret is that it is all so terribly true." Wilson's family had sympathized with the Confederacy during the Civil War, and cared for wounded Confederate soldiers at a church. When he was a young man, his party had vigorously opposed Reconstruction, and as president he resegregated the federal government for the first time since Reconstruction.

Given the film's strong Democratic partisan message and Wilson's documented views on race and the Klan, it is not unreasonable to interpret the statement as supporting the Klan, and the word "regret" as referring to the film's depiction of Radical Republican Reconstruction. Later correspondence with the film's director, D.W. Griffith, confirms Wilson's enthusiasm about the film. Wilson's remarks were widely reported and immediately became controversial. Wilson tried to remain aloof from the controversy, but finally, on April 30, he issued a non-denial denial. His endorsement of the film greatly enhanced its popularity and influence, and helped Griffith to defend it against legal attack by the NAACP; the film, in turn, was a major factor leading to the creation of the second Klan in the same year.


Progressive Democrat Wilson, like most Southern progressive Democrats, had a ferocious disdain for blacks. He barred blacks from Princeton when he was president of the university, and he re-segregated the federal civil service and the army as President (both had been integrated by Republicans since Reconstruction). His Progressive Democrat colleagues and descendants segregated the South. Wilson was the patriarch of modern Democrat big-government liberalism, of which segregation was one of its more extensive social engineering projects. FDR served as a junior official in his administration, and merely carried on the enormous expansion of government that Wilson had so aggressively started.

The salient characteristic of modern Liberalism/Progressivism is not racial justice. It is big government social engineering, of which segregation was a vibrant cog. When Progressive Democrats squeezed the last drops of political juice out of segregation in the 1960's, they dropped the old moniker, called themselves Liberals, and squeezed the heck out of affirmative action and forced busing and any system of race-baiting and racial bean-counting they could get away with. They're still doing it. Old habits die hard.

Social engineering according to race and political manipulation of racial fear are the desiderata of Liberalism/Progressivism.  A color-blind society is anathema to Liberal Progressive Democrats.
Posted by mregnor at 6:00 AM