"...there is is a 58 percent chance that an atheist leader will murder a noticeable percentage of the population over which he rules." 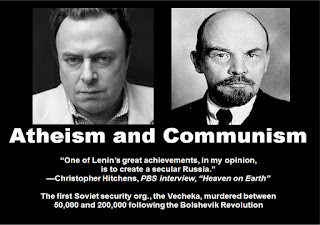 Apparently it was just an amazing coincidence that every Communist of historical note publicly declared his atheism … .there have been twenty-eight countries in world history that can be confirmed to have been ruled by regimes with avowed atheists at the helm … These twenty-eight historical regimes have been ruled by eighty-nine atheists, of whom more than half have engaged in democidal acts of the sort committed by Stalin and Mao …

The total body count for the ninety years between 1917 and 2007 is approximately 148 million dead at the bloody hands of fifty-two atheists, three times more than all the human beings killed by war, civil war, and individual crime in the entire twentieth century combined.

The historical record of collective atheism is thus 182,716 times worse on an annual basis than Christianity’s worst and most infamous misdeed, the Spanish Inquisition. It is not only Stalin and Mao who were so murderously inclined, they were merely the worst of the whole Hell-bound lot. For every Pol Pot whose infamous name is still spoken with horror today, there was a Mengistu, a Bierut, and a Choibalsan, godless men whose names are now forgotten everywhere but in the lands they once ruled with a red hand.

Is a 58 percent chance that an atheist leader will murder a noticeable percentage of the population over which he rules sufficient evidence that atheism does, in fact, provide a systematic influence to do bad things? If that is not deemed to be conclusive, how about the fact that the average atheist crime against humanity is 18.3 million percent worse than the very worst depredation committed by Christians, even though atheists have had less than one-twentieth the number of opportunities with which to commit them. If one considers the statistically significant size of the historical atheist set and contrasts it with the fact that not one in a thousand religious leaders have committed similarly large-scale atrocities, it is impossible to conclude otherwise, even if we do not yet understand exactly why this should be the case. Once might be an accident, even twice could be coincidence, but fifty-two incidents in ninety years reeks of causation![10]


Vox provides a fascinating perspective. Even if one sets aside the obvious cause-and-effect relationship between State Atheism as a ruling ideology and mass-murder,  a simple analysis of the atheist/theist beliefs of the leaders of nations is a shocking indictment of atheism.

In the 20th century, "there is is a 58 percent chance that an atheist leader will murder a noticeable percentage of the population over which he rules."

Atheism is the deadliest ideology in history, without rival.
Posted by mregnor at 6:00 AM