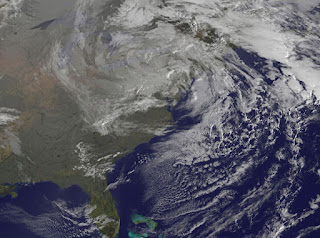 
[T]o call Sandy a harbinger of a "new normal," in which unprecedented weather events cause unprecedented destruction, would be wrong. This historic storm should remind us that planet Earth is a dangerous place, where extreme events are commonplace and disasters are to be expected. In the proper context, Sandy is less an example of how bad things can get than a reminder that they could be much worse.

In studying hurricanes, we can make rough comparisons over time by adjusting past losses to account for inflation and the growth of coastal communities. If Sandy causes $20 billion in damage (in 2012 dollars), it would rank as the 17th most damaging hurricane or tropical storm (out of 242) to hit the U.S. since 1900—a significant event, but not close to the top 10. The Great Miami Hurricane of 1926 tops the list (according to estimates by the catastrophe-insurance provider ICAT), as it would cause $180 billion in damage if it were to strike today. Hurricane Katrina ranks fourth at $85 billion.

To put things into even starker perspective, consider that from August 1954 through August 1955, the East Coast saw three different storms make landfall—Carol, Hazel and Diane—that in 2012 each would have caused about twice as much damage as Sandy.

While it's hardly mentioned in the media, the U.S. is currently in an extended and intense hurricane "drought." The last Category 3 or stronger storm to make landfall was Wilma in 2005. The more than seven years since then is the longest such span in over a century.

The attribution of Hurricane Sandy to "global warming" is category five junk science.