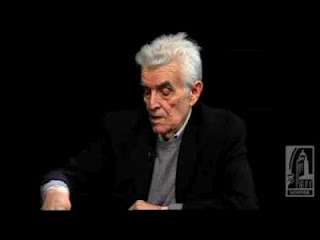 I've been meaning for a while to post on Rene Girard. Girard is a Catholic literary critic, cultural anthropologist, and philosopher who is now a scholar at the Hoover Institute.  I discovered his work several years ago, although I'm late to the Girardian world. He is renowned. He has been elected to the Academie francaise and has twice been a Guggenhiem Fellow, among many other honors.

This is why he is renowned: Girard's theory of anthropology has a good claim to be 'the greatest idea anyone ever had'.

I'll try to distill it here, and to convey why it is a transformative insight.

Girard's insight is called Mimetic Theory. He posits that what makes us human is that we imitate. Mostly we imitate each other, and sometimes we imitate fictional characters. Sometimes we imitate God. But it is our imitation-- our mimesis-- that makes us human. Mimesis is how humans work. This is, I should note, not an original insight, and accords well with the classical (Aristotelian) understanding of the human mind as a form which takes on other forms, which become our thoughts and desires.

As humans we also desire, and desire is central to our striving. We want things-- love, wealth, friendship, salvation, that new red convertible, etc.

Yet as mimetic creatures, our desire is not autonomous. We imitate desire-- the desire of others. And here, Girard notes, is the seed of conflict. Desire is generally not binary-- between subject and object of desire, but a trinity-- subject, model, and object. We learn what to desire from the desires of others, from the desire of the models we imitate.

The source of our violence and of our religion and our civilization? This is how.

Girard observes that mimetic desire, while sometimes harmless and even beneficial, is often the source of great and even violent conflict. We cannot always have what our model(s) want, and mimetic desire easily descends into mimetic contagion-- the struggle of all against all. We often forget even that we are competing for desired objects. We simply want to defeat, and even exterminate, those from whom we model our desires and with whom we compete.

This can and often does lead to violent destruction- war, genocide, crime. A society in the midst of violent mimetic contagion cannot long endure.

The solution that mankind has worked out, Girard proposes, is a recurring mechanism at all levels of culture: scapegoating. Girard observes that violent mimetic contagion can be extinguished by placing the blame for all of the turmoil on a scapegoat-- usually a person or group of people who are different from most of the people in the community. We scapegoat those who are not like us. A community in violent mimetic contagion unite against the scapegoat, and expel or even kill the scapegoat, thereby quieting the mimetic conflict by unity inherent to scapegoating. The community remains peaceful for a while, until new mimetic contagion arises, and then a new scapegoat is found. It is a cycle of mimetic violence and scapegoating and reconciliation, endlessly repeated.

In some cultures under particularly intense mimetic stress, the scapegoat is an entire class of people. Girard offers a profound explanation for the Holocaust, and for all the holocausts man visits on man.

This need for scapegoating to calm mimetic contagion and the astonishing violence to which it can give rise is the origin of religious sacrifice. Religion serves as a way to calm mimetic violence, and virtually all primitive religions used (and still use) sacrifice-- the killing of a scapegoat-- to maintain harmony. Primitive religion is the institutionalization of scapegoating.

Originally the sacrificial scapegoat in primitive religion was a person (human sacrifice), which in time became animal sacrifice.

This regularization of the sacrifice of a scapegoat in order to mollify mimetic contagion and violence through religion is the origin of civilization, which have invariably been built on religious institutions and on the symbolic scapegoating inherent to religion.

Now Girard, a devout Catholic, makes an astonishing leap. He observes that only one religion in antiquity-- Judaism-- consistently taught that human scapegoats are innocent. Judaism consistently told the truth about scapegoating. Human sacrifice was abolished, and the Old Testament is full of imprecations for mercy and generosity for strangers. The story of Joseph is a story of the innocence of a scapegoat-- Joseph, who was betrayed and persecuted by his brothers. Girard casts light on God's disapproval of Cain because he tilled the soil and approval of Abel because he raised livestock. Abel could carry out animal sacrifice, whereas Cain, who worked the soil and had no livestock to substitute for humans in sacrifice, killed his own brother in mimetic violence.

Girard believes that violent mimesis and scapegoating of human beings is pure evil- he actually proposes that this is the manifestation of Satan in this world.

It is Girard's interpretation of the Incarnation that is most astonishing. He asserts that Christianity is God's definitive revelation of mimetic conflict and the evil of scapegoating to mankind. He asserts that God made us to imitate Him, and that our imitation of evil models and the violent mimetic contagion that arises from it is at the root of our own evil. God in the Person of Christ came Himself to die as a scapegoat-- a completely innocent scapegoat-- to show us by His life that we are to imitate Him in his non-violence and his mercy, and to show us that the human scapegoats whom we have persecuted and slaughtered for millennia are innocent.

Girard sees Christianity as the ultimate revelation of the role violent mimetic contagion and scapegoating has played in human history and as the solution to it. Christ's sacrifice of Himself exposed scapegoating as evil, even as Satanic.

Girard applies his thought to a broad swath of human experience, including politics, mythology, literature, homosexuality, sadism and masochism, Islam, the Apocalypse, among many others. His insight is a remarkable example of the power and relevance of Christian insight that after two millennia continues to reveal to us the truth about God and ourselves and the world.

Girard's insights are astonishing, and there is much more in his thought. I have merely scratched the surface. The best reference for Girard is his I Saw Satan Fall Like Lightning, which presents his work in a distilled and coherent form. Things Hidden Since the Foundation of the World, Violence and the Sacred, and The Girard Reader are superb works as well, although I'd recommend starting with I Saw Satan Fall Like Lightning. Peter Robinson of the Hoover Institution has a wonderful series of interviews with Girard on Uncommon Knowledge. The Catholic site Paying Attention to the Sky has a very nice essay-overview of Girard's thought.

Girard's work is content-packed and not easy-going, and it takes a while to become comfortable with his perspective, but it is worth every bit of the effort to understand him.

I understand things about my deepest beliefs and thoughts in ways that I had never imagined, and his insights have profound implications for our culture and our faith and our politics. He hews closer to the truth on what it means to be human than any thinker I have encountered.

When you've encountered Girard, you see the world very differently. We are just beginning to understand what he has uncovered. His ideas will change mankind, and unlike other modern prophets like Marx and Freud to which he has been compared, he will change mankind much for the better.
Posted by mregnor at 6:00 AM