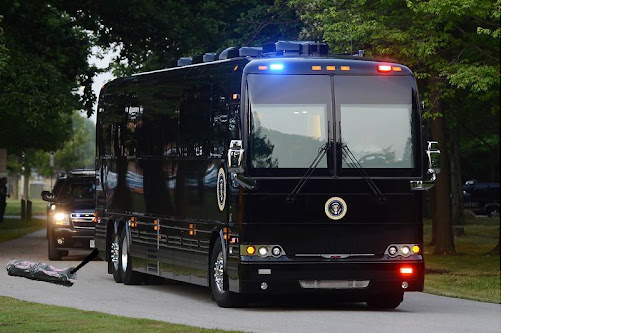 (Dissociated Press) On a meandering tour of Ohio's country roads and city streets, the President has returned to the campaign trail for the last crucial week before the presidential election.

But this time, he brought a unexpected guest.

"We call it our "War on Man-Caused Disasters Tour", said White House Press Secretary Jay Carney, gazing uncomfortably out the back window of the 12-ton specially made presidential bus as the body bag with the terror mastermind's corpse bounced and scuffed along the potholes of Ohio's bucolic Route 42.

The Administration has acknowledged ordering the legendary Seal Team 6 to conduct deep-sea manuvers in the North Arabian Sea, where the special forces commandos were able to exhume the remains of America's most wanted terrorist and most implacable foe.

On the bus, Administration officials were reserved but proud of their foreign policy accomplishments.

"Bin Laden's dead and General Motors is alive" said Vice President Joe Biden, who joined the President on the hulking Obama-Biden campaign bus, which was specially-made in Canada.

In the run-up to the election, the President has been touting his foreign policy accomplishments, which have included killing the Al Qaeda chief as well as neutralizing bin Laden and taking out the mastermind of the 9-11 attacks. In addition, Administration officials point out that the President authorized the raid that removed the terrorist responsible for killing 3000 Americans, as well as bringing to justice the instigator of the World Trade Center attacks and taking out the culprit responsible for the attack on the Pentagon and eliminating the mastermind of the hijacking of doomed Flight 93 over Pennsylvania.

"In addition, it's easy to forget that bin Laden's still dead!" noted Press Secretary Carney, who announced that the White House is proclaiming November 6th as "Osama bin Laden is Still Dead" Day.
Posted by mregnor at 6:00 AM