"Are we living in the Hunger Games?" 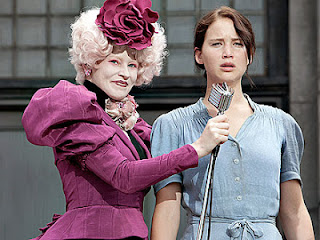 D.C. has power and wealth while the rest of the country suffers. It's not a question of who the odds favor. Washington, DC is doing a lot better than the rest of the country. Washington is rich not because it makes valuable things, but because it is powerful. That's where we are now, with a Capital City that looks more and more like the capital city of an imperial power.

You know the story: While the provinces starve, the Capital City lives it up, its wheeler-dealer bigshots growing fat on the tribute extracted from the rest of the country.

We don't live in The Hunger Games yet, but I'm not the first to notice that Washington, D.C., is doing a lot better than the rest of the country. Even in upscale parts of L.A. or New York, you see boarded up storefronts and other signs that the economy isn't what it used to be. But not so much in the Washington area, where housing prices are going up, fancy restaurants advertise $92 Wagyu steaks, and the Tyson's Corner mall outshines -- as I can attest from firsthand experience -- even Beverly Hills' famed Rodeo Drive.

Meanwhile, elsewhere, the contrast is even starker. As Adam Davidson recently wrote in The New York Times, riding the Amtrak between New York and D.C. exposes stark contrasts between the "haves" of the capital and the have-nots outside the Beltway. And he correctly assigns this to the importance of power.

Washington is rich not because it makes valuable things, but because it is powerful. With virtually everything subject to regulation, it pays to spend money influencing the regulators. As P.J. O'Rourke famously observed: "When buying and selling are controlled by legislation, the first things to be bought and sold are legislators."

Allied with the Mainstream Media, the Capitol is getting damn good at bread and circuses. Food Stamps and Reality T.V.

Classical stratagems to suppress rebellion against elites.
Posted by mregnor at 6:00 AM