86 years after the Scopes trial, Darwinists are siding with the censors 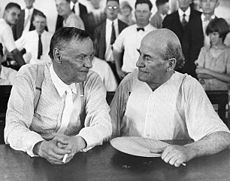 The [Tennessee Academic Freedom] law turns the clock back nearly 100 years here in the seemingly unprogressive South and is simply embarrassing.

Brandt's "turns back the clock" refers to the Scopes Trial, in Dayton Tennessee in 1925.

Let's look at the facts.

Scopes, a teacher, was prosecuted for teaching that Darwin's theory is a scientific alternative to the explanation for origins given in Genesis. He was convicted under the Butler act:

That it shall be unlawful for any teacher in any of the Universities, Normals and all other public schools of the State which are supported in whole or in part by the public school funds of the State, to teach any theory that denies the Story of the Divine Creation of man as taught in the Bible, and to teach instead that man has descended from a lower order of animals...

The Butler Act remained Tennessee Law until 1967, when it was repealed following a lawsuit by a teacher who was fired for violating it.
The new Tennessee Academic Freedom Law codifies the repeal of the Butler Act. The new law is the anthesis of the Butler Act. The Academic Freedom Law guarantees teachers in Tennessee the right to do just what Scopes did-- the right to teach students to critically analyze and ask questions about scientific theories. It protects teachers from being punished or fired for asking questions about scientific theories.

"More than 85 years ago, Tennessee teacher John Scopes appealed for the right to teach students all of the scientific evidence," said Dr. John West, Associate Director of Discovery Institute's Center for Science and Culture. "This historic new law now secures that right. It's ironic that many of today's defenders of evolution have abandoned Scopes' plea for free discussion and are pushing for censorship and intolerance in the classroom instead. It's also unfortunate that Governor Haslam lacked the political courage to sign the bill."

West noted that the law defends a principle Scopes himself had endorsed in the following statement: "If you limit a teacher to only one side of anything, the whole country will eventually have only one thought... I believe in teaching every aspect of every...theory."

Teachers in Tennessee are still required to teach according to state and local science standards. But under the new law, teachers are allowed to objectively present additional scientific evidence, analysis, and critiques regarding topics already in the approved curriculum.

Darwin-only lobbyists launched a misinformation and scare campaign in an effort to encourage Governor Bill Haslam to veto the bill. Critics falsely claimed that the bill promotes religion instead of science, asserted that jobs would be lost due to the law's passage, and threatened costly lawsuits.

"The bill expressly states that it 'shall not be construed to promote any religious or non-religious doctrine,'" explained Casey Luskin an attorney with Discovery Institute's Center for Science & Culture. "Moreover, in places like Texas and Louisiana that have similar legislation or science standards there has been no negative economic impact at all. And contrary to critics, no lawsuits have materialized in other states or districts with such policies in place."

At least ten states now have statewide science standards or laws that protect or encourage teachers to discuss the scientific evidence for and against Darwinian evolution.

The new Tennessee Academic Freedom Law would have protected John Scopes and other teachers who were punished for teaching science as critical analysis. It is a real step forward for effective teaching of science in public schools.

How ironic that 86 years after the Scopes trial, Darwinists are siding with the censors, not with the teachers. Why are they so afraid of questions about their science?