Michael Barone on the renewed attention paid by ordinary Americans to what the Constitution really says. 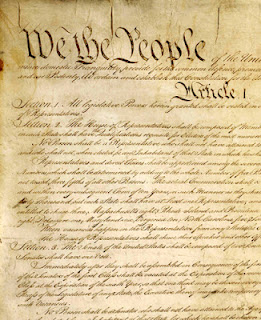 Here's my suggestion: school kids should be required to memorize and understand the Bill of Rights, Fourteenth Amendment, and critical clauses (enumerated powers, etc), in the same way and with the same rigor that they now must memorize multiplication tables, etc.

Students should memorize the salient portions of the Declaration as well. As the Supreme Court noted in 1897:

Every high school graduate should know this by heart:

We hold these truths to be self-evident, that all men are created equal, that they are endowed by their Creator with certain unalienable Rights, that among these are Life, Liberty and the pursuit of Happiness.

The Constitution and the Declaration belong to us-- ordinary citizens-- and we must insist that our elected and appointed leaders obey in letter and spirit.

We cannot protect our rights if we don't know what they are.
Posted by mregnor at 10:11 AM