'But she's such a pretty totalitarian...' 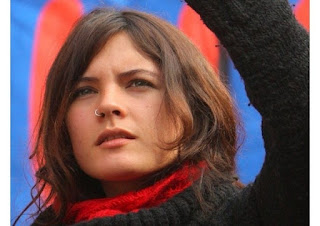 My breakfast was darkened by reading a gushing New York Times Magazine article on Camila Vallego. Miss Vallego is a brave young Chilean college student demanding... ummm... free stuff. Free education, nationalization of industries, taking money from people she doesn't like and giving it to people she does like, yada, yada. It takes the fawning author-- novelist Francisco Goldman, professor of literature and creative writing at Trinity College-- twenty one paragraphs of creative writing to get around to the salient point about Ms. Vallego. She's not just another Nancy Pelosi sans the botox.


Miss Vallego is a communist.


Goldman's paean to Miss Che-Guevera-without-the-chest-hair is disturbing. Clay Waters at Newsbusters points out the obvious:


The New York Times Sunday Magazine's latest venture into esoteric Latin American leftism: Novelist Francisco Goldman's 5,000-word profile of left-wing student activist Camila Vallejo, member of the Communist Chilean Youth and considered hot stuff by besmitten leftists, including Goldman, judging by his yearning prose in "'They Made Her An Icon.'" Goldman does not mention her Communist Party affiliation until paragraph 21, almost halfway through the tale. (Vallejo is in Cuba now, to mark the 50th anniversary of Cuba’s Union of Young Communists.)

As Goldman wrote, Vallejo is organizing public protests in Chile (they don't have protests in Cuba) for free education...and higher taxes...and nationalization of resources. In another words, a Communist Party member is pushing a Communist agenda in Chile, and the Times is giving her a huge platform through Goldman's celebration of Vallejo's photogenic looks and media-friendly charisma.

The last communist to rise to power in Chile-- Salvatore Allende-- wrecked the Chilean economy (inflation in 1973 was 700%), set up the usual Marxist kleptocracy, ripped up the Chilean Constitution, wrecked Chilean agriculture (food imports rose 149%), performed the obligatory fellatio on Fidel Castro and Leonid Brezhnev and every communist patron he could find with spare cash and a pillow to kneel, set about reorganizing the Chilean police and army along Soviet lines with enthusiastic cooperation from Soviet intelligence services (including $100 million dollars in credit, ships, tractors, food, and planned delivery of Soviet artillery and tanks), and received the coveted Lenin Prize in 1972 (note: it's never good if the president of your country receives the Lenin Prize). When the Chilean people had enough of Marxist utopia, the Chilean Chamber of Deputies and Supreme Court asked the Chilean military to help Dear Leader with his retirement planning. President Allende, courageous to the last, committed his only act of statesmanship and shot himself.

It seems to take a good generation or two for cultural memory to fade. Now another Vanguardess of the Proletariat is whipping up the Chilean left.

Should Miss Vallego and her Bolshevik sorority gain power, perhaps things will be different. 20th century communism is so... last century. Perhaps 21st century communists will bring a trace less economic devastation and cultural ravage. Perhaps slightly less extinction of the human spirit. Maybe a smaller gulag. Maybe not quite as many corpses. Perhaps only localized famines. Perhaps refugees in the millions, instead of the tens of millions. Things could be looking up for life under the Communist Chilean Youth.

Vallego has a real shot here. A commie with job prospects. She's considerably easier on the eyes than her progenitors, and even if she runs into the Bolivian army, she could still sell a lot of t-shirts. She's got at least one fawning 21st century Walter Duranty in her curvaceous back pocket.

Communism with a pretty face. It's about the only thing the homicidal bastards haven't tried. It might work.