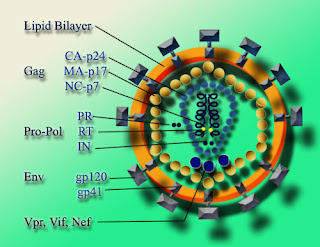 AIDS is a metaphor for atheism.

There are many ideological infections that lay waste to civilization. Racism, anti-Semitism, Communism, Nazism and fascist ideologies, among others. Depending on one's beliefs, religions may infect societies as well. I believe that Islam is pernicious. Others would posit (and I would passionately disagree) that Catholicism or Protestantism or Judaism degrade civilizations.

The damage caused by each ideology is the direct effect, more or less, of the tenets of the ideology. The abolition of private property and civil liberties, the promotion of one race or nationality over another, the imposition by force of sectarian religious precepts are all direct corollaries of ideologies harmful to humane civic life.

Infection is a good metaphor for ideologies. Richard Dawkins' concept of religion as a meme-- "like a virus only harder to eradicate" is a prime example of such an analogy between ideology and infection.

I disagree. Atheism inherently involves certain quite clear ideological assertions-- there is no transcendent purpose to existence, man is an evolved animal and not a spiritual being, there is no moral code that transcends man's mind, etc.

But there is a glimmer of truth in atheists' claim that atheism isn't an ideology. While atheism certainly has ideological consequences, it is not generally asserted as an coherent system of belief. That may be because atheists are incapable of coherence-- a view buttressed by acquaintance with New Atheist literature-- or it may be merely a propensity of atheists to anarchy.

But this iconoclastic vein in atheism raises important observations about atheism's political and social consequences.

In the West, the most effective impediment to state power and to totalitarian rule has been the Church, in its Catholic and Protestant forms. Christianity, even when established as the state religion, has long served as a break on absolute state power. One could even make the case that much of the history of Europe from the fall of Rome to modernity has been the incessant shifts of power between church and state. The shrive of Henry IV on his knees in the snow before Pope Gregory VII is the paradigm of the moderation of state power by the Church.

Atheism then is an infection, but not quite like religious infections. Atheism deprives the body politic of its resistance to state power. It destroys its immunity to totalitarianism, by destroying the primary alternate allegiance-- allegiance to God-- that has long served to check the state.

Ideological memes like communism or Nazism or fascism are like smallpox or tuberculosis or typhus. They are deadly, can spread precipitously and can be very hard to eradicate.

Atheism is like AIDS.
Posted by mregnor at 6:00 AM