Why are some black lives worth more than others? 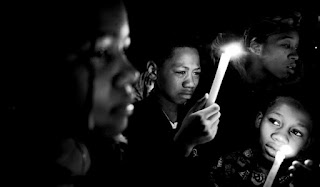 We seem to only value the lives of black murder victims when their murder seems to confirm the accusation that we are a deeply racist society. But isn't the selective valuation of only the few black lives extinguished by whites, and the ignoring of the 94% of black murder victims killed by other blacks, stronger evidence for racism than the rare white-on-black murders?

Perhaps there is a strong streak of racism in our society that persists, disguised as anti-racism.

Evil is subtle, and loves irony.
Posted by mregnor at 8:27 AM