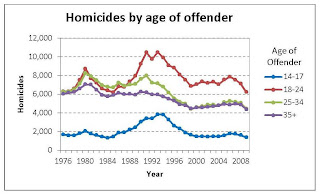 Wesley Smith has a thoughtful post on this toxic question.


The idea, I think, is that the fetuses who became medical waste would, but for being aborted, have become children raised in unstable homes and poor environments, leading many, thereafter, to commit crimes in disproportionate numbers. It has raised hackles, as well it should... So, did abortion reduce the crime rate? Who knows? Who cares? It really doesn’t matter–unless one thinks that we have to encourage “certain people” not to procreate as a means of reducing crime. If we go there, we are off a moral cliff that looks an awful lot like the old eugenics.

I agree. The inference that a crime reduction caused by Roe is good is morally repugnant. Preemptive killing of undesirable populations is never ethical, even if it reduces crime, and the claim that it does reduce crime, irrespective of the truth or falsehood of the assertion, bestows an unwarranted luster on raw evil. Abortion is evil, and eugenic abortion is evil, perhaps on an even deeper level.

There are many arguments offered by both sides on the factual issue. Those who assert that Roe had no effect point out that the crime reduction by age cohorts is opposite what a Roe effect would predict. Crimes by older criminals declined sooner than crimes by younger criminals. In addition, the cohort of young teens born in the decade prior to Roe had lower crime rates (by a factor of 3) than the cohort born in the decade after Roe (the pruned cohort).  Others disagreed. The debate continues.

The evidence of course is unequivocal-- there has been a marked increase in incarceration rate, that has corresponded more or less with the fall in crime. That is not what the Roe effect advocates would predict. The data suggests that we have less crime because we are more effective at getting criminals off the street.

More criminals in jail, less crime. Odd how that works.

Which reminds me of perhaps the dumbest (and funniest) article ever published in the New York Times. It's title:

Despite Drop in Crime, an Increase in Inmates


It's author, Fox Butterfield, was... dumbfounded. He was quite seriously perplexed. Why would there be less crime when you have more criminals in jail?

In seeking to explain the paradox of a falling crime rate but a rising prison population...