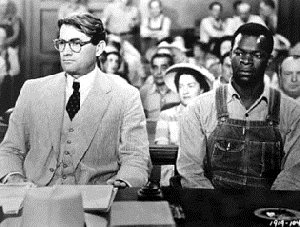 Gary Furr has a nice post on Harper Lee's To Kill a Mockingbird, which was published a little more than 50 years ago.

Mockingbird is a masterpiece. It moved me deeply as a child-- I saw the movie at age nine, and read the book shortly thereafter. I didn't even know what rape was, but I knew what Atticus Finch did, and he was my hero. He still is.

“Surely it is plain to the simplest intelligence that To Kill a Mockingbird spells out in words of seldom more than two syllables a code of honor and conduct, Christian in its ethic, that is the heritage of all Southerners.”

The story resonated with me in many ways, and perhaps when I can I'll post more on it. But I have always considered the novel as something transcendent. Sometimes artists break through into Truth beyond the mundane things which men ordinarily are given to see. Harper Lee did that.

In high school, I asked my beloved English teacher (Mr. Mysrall-- God rest his soul) why Harper Lee never wrote another novel. Why did she stop with To Kill a Mockingbird?

He eyed me for a moment, and replied "She scared herself".
Posted by mregnor at 6:00 AM