"a gibbering, snorting, mumbling clown with a rictus-grin locked on his mug a heartbeat away from controlling America's nuclear arsenal" 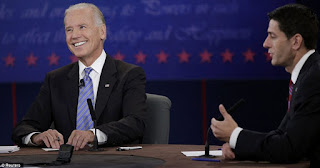 Last night's performance by Biden – capering, giggling, near-maniacal opera buffa – was targeted in one place: a dispirited, demoralized Democratic base on the edge of panic.

Paul Ryan was businesslike, steady, and on-point. He hit solid doubles all night, and that's all he needed to do. If he'd been as amped and manic as Biden, it would have been a political and imaging disaster.

Biden aimed to throw the Obama base a lifeline. He fed the Kos Kidz desperate need to see some fight, but at the cost of his remaining (and mostly notional) dignity. If you want a gibbering, snorting, mumbling clown with a rictus-grin locked on his mug a heartbeat away from controlling America's nuclear arsenal, Joe Biden's your guy.

Ryan aimed to meet the standard of gravitas and presence, to demonstrate to the fabled female/suburban/swing/moderate voters that he's not a scary granny-killing Terminator sent from the future to throw seniors into the snowbank. He had to demonstrate steadiness, stature and knowledge. Done and done.

The conventional wisdom this morning is that the debate was a tie. That conventional wisdom is (as is so often the case) dead wrong. Biden played to his base, trying to dig Obama out of the hole he's been trapped in since last week's debate trainwreck. Ryan played to the center, to the swing and to the late-engagers. The post-hoc coverage won't factor into their decisions: the pictures and Biden's mugging, drunk-uncle affect will. (Also, Biden opened several new, Costco-scale cans of worms for the Administration on the Libya scandal.)

In short, Biden did nothing to reset the race, and the edge of panic is still there in the Obama campaign.

When edifices – particularly political edifices built around the myth and personality of one man – collapse, they collapse suddenly. The center does not hold. The man dragged from the spider hole isn't a dictator, he's a prisoner. The Master of the Universe hedge fund manager who's really just a Ponzi schemer gets booked at Rikers like the rest of 'em. The spell cast by power, once broken, is hard to restore.


It's fascinating to watch. Americans were waiting. Waiting to see Obama and Romney and Biden and Ryan unfiltered. They saw.

The media sold us this president, like they sell all sorts of other junk, and after millions of jobs lost and trillions of dollars of deficits wasted and thousands of pages of government intrusion in our lives and burning embassies and a dead ambassador and several new Islamist theocracies, millions of Americans are coming to understand what hiring a chronically unemployed mildly charismatic leftist on the ultimate affirmative action plan has done to our country.