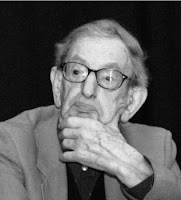 Hobsbawm... was a lifelong Marxist, a card-carrying member of the Communist Party from his teens until the collapse of the Soviet Union in 1991. Long after it was evident to even true believers that the Bolshevik Revolution had unleashed a nightmare of blood, Hobsbawm went on defending, minimizing, and excusing the crimes of communism.


Interviewed on the BBC in 1994 – five years after the fall of the Berlin Wall – he was asked whether he would have shunned the Communist Party had he known in 1934 that Stalin was butchering innocent human beings by the millions. "Probably not," he answered – after all, at the time he believed he was signing up for world revolution. Taken aback by such indifference to carnage, the interviewer pressed the point. Was Hobsbawm saying that if a communist paradise had actually been created, "the loss of 15, 20 million people might have been justified?" Hobsbawm's answer: "Yes."

Imagine that Hobsbawm had fallen in love with Nazism as a youth and spent the rest of his career whitewashing Hitler's atrocities. Suppose he'd refused for decades to let his Nazi Party membership lapse, and argued that the Holocaust would have been an acceptable price to pay for the realization of a true Thousand-Year Reich. It is inconceivable that he would have been hailed as a brilliant thinker or basked in public acclaim; no self-respecting university would have hired him to teach; politicians and pundits would not have lined up to shower him with accolades during his life and tributes after his death.

Yet Hobsbawm was fawned over, lionized in the media, made a tenured professor at a prestigious university, invited to lecture around the world. He was heaped with glories, including the Order of the Companions of Honour – one of Britain's highest civilian awards – and the lucrative Balzan Prize, worth 1 million Swiss francs. His death was given huge play in the British media – the BBC aired an hour-long tribute and the Guardian led its front page with the news – and political leaders waxed fulsome. Former prime minister Tony Blair called him "a giant … a tireless agitator for a better world."

Such adoration is sickening. Unrepentant communists merit repugnance, not reverence.


There has never been a proper accounting for the fellow-travelers and outright communists who caused and excused the immense crime against humanity that was state atheism in the 20th century, and who still oppress millions in North Korea and elsewhere. Countless intellectuals used their gifts to advance and defend raw evil. More often than not, communist killers and their press agents are lionized.

The accounting will come, for each in his own time, as it has now come for Hobsbawm.
Posted by mregnor at 6:00 AM