"Obama and Biden were winning—until they faced actual opponents" 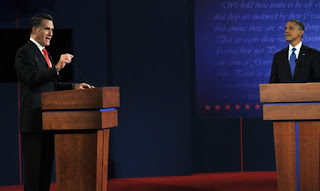 Matthew Continetti gets to the heart of reason for the massive shift in polls to Romney:

Hold it, I’m confused. I watched all of the vice presidential debate last night, and someone did not show up. Vice President Joe Biden was there—how could one miss him, with all the grinning, grunting, interrupting, and sneering. But where was the Ayn Rand-worshiping, rape-redefining, fanatically exercising zealot who wants to throw grandmothers off of cliffs and whose budget plan is, according to the president, “thinly veiled Social Darwinism” that is “antithetical to our entire history as a land of opportunity and upward mobility”? That Paul Ryan was nowhere to be found.

What America saw instead was a young and likable and knowledgeable conservative worried about the current trajectory of fiscal, monetary, foreign, and social policy. Where Biden harrumphed, Ryan calmly litigated President Obama’s failed record. Twice in eight days, the caricatures against which President Barack Obama and Biden are purporting to run have been exposed as grotesque exaggerations. The liberal attempt to frighten America with the illusory specter of an extremist Republican ticket dissolved on first contact with, well, the actual ticket.

Continetti understands the reason for the swelling Romney/Ryan polls. Most Americans don't follow politics closely, and they didn't know Romney or Ryan. That's why they tuned in in record numbers-- 70 million-- for the first debate. The folks know that the media wasn't telling the whole story, and they've tuned out the quarter-billion dollar Democrat smear campaign.

They just wanted to see Romney and Obama together, without any filter.

Nothing else really mattered. The second and third debates don't matter much. They saw Romney for themselves at the first debate, without the spin, and they realized that they'd been lied to.

In all but name, Obama's presidency ended that night.
Posted by mregnor at 5:24 PM