“We can’t wait. . . . We have a planetary emergency. Here are just a few of the investments that I personally think make sense.” 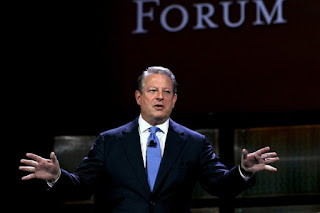 
Before a rapt audience, Al Gore flashed slides on a giant screen bearing the logos of 11 clean energy companies he predicted could help slow climate change.

“We can’t wait. . . . We have a planetary emergency,” the former vice president told industry leaders and scientists at the 2008 conference. “Here are just a few of the investments that I personally think make sense."Today, several of those clean tech firms are thriving, including a solar energy start-up and a Spanish utility company that has dotted rural America with hundreds of wind turbines.

Al Gore is thriving, too.


The man who was within sight of the presidency 12 years ago has transformed himself, becoming perhaps the world’s most renowned crusader on climate change and a highly successful green-tech investor.


Just before leaving public office in 2001, Gore reported assets of less than $2 million; today, his wealth is estimated at $100 million.


Al Gore is global warming hysteria incarnate, in all of its shameless venality.