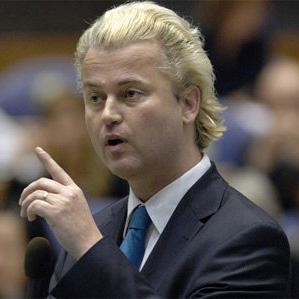 Diana West has a review of Geert Wilders' new book on Islam titled "Marked for Death: Islam's War Against the West and Me".

... Wilders, for eight years a political prisoner of Islam requiring round-the-clock security to avoid assassination, quotes from the anti-Islamic writings of our presidents John Quincy Adams and Teddy Roosevelt. Both men warned against the dangers that Islam poses to liberty and Christianity. These writings will jolt the postmodern reader, alerting us that we are reading something society outlaws as taboo: criticism of Islam.

In 1916, [Theodore] Roosevelt observed: "Wherever the Mohammedans have had a complete sway, wherever the Christians have been unable to resist them by the sword, Christianity has ultimately disappeared" (ditto Judaism, Buddhism, Zoroastrianism ...). Roosevelt rejected as "naive" the notion that "all religions are the same." Some religions, he explained, "give a higher value to each human life, and some religions and belief systems give a lower value." Our "social values," including equality before the law, exist "only because the Christians of Europe (did) what the Christians of Asia and Africa had failed to do -- that is, to beat back the Moslem invader."

John Quincy Adams wrote that Muhammad "poisoned the sources of human felicity at the fountain, by degrading the condition of the female sex, and the allowance of polygamy; and he declared undistinguishing and exterminating war as part of his religion, against all the rest of mankind. THE ESSENCE OF HIS DOCTRINE WAS VIOLENCE AND LUST; TO EXALT THE BRUTAL OVER THE SPIRITUAL PART OF HUMAN NATURE."

The capital letters are Adams', by the way, and the source Wilders draws from is "The American Annual Register of 1827-28-29," where Adams published unsigned essays in 1830 (listed in Lynn H. Parsons' annotated bibliography of Adams' works) in between his tenure as president and his return to Congress...

Today, however, with liberty shrinking in direct proportion to Islam's rising influence in the West, Wilders' voice is one of few to make itself heard. Why? Wilders points to the entrenchment of cultural relativism, an ideology that rises from the ashes of Judeo-Christian-humanism to promote, as interchangeable, all other cultures, religions, creeds, over our own.


Wilders has... ummm... balls. He has courageously spoken the truth about the threat Islam poses to the West.  Those of us in the Dar-al-Harb need to understand the violent totalitarian nature of militant Islam. We need to put aside political correctness (which is just cowardice) and tell the truth about Islam and the West.

Wilders' book is going to be a must-read. It is written by a man with real courage who puts his own life on line to tell the truth.
Posted by mregnor at 6:00 AM