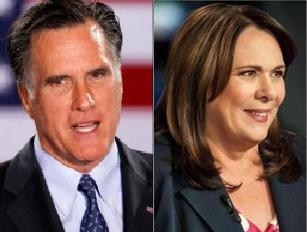 (Dissociated Press) In a poll of undecided voters taken just after the second "town hall" presidential debate, voters were split 52% to 48% on the victor of the lively debate between Republican candidate Mitt Romney and Democrat interference-runner and CNN "correspondent" Candy Crowley, with a slight majority favoring Crowley.

"Crowley was particularly effective in redirecting Romney's point about the dishonesty and coverup of the terrorist attack that killed the ambassador" Williams said. "I thought she handled herself very well. Much better than that teleprompter that debated Romney in the first debate."

Romney seemed to stumble when his opponent from CNN repeatedly interrupted him and guided the line of questioning in a way clearly intended to pose a challenge to the challenger.

Many analysts contributed Crowley's effectiveness to her extensive debate prep, which has lasted four years, and even longer if you count the run-up to the 2008 presidential election.

"'Journalists' like Crowley have had the advantage of years of rhetorical legendermain in protecting the Left from public scrutiny" noted political analyst Herb Candor. "She just stepped up to the debate podium and continued doing what she and the "tingle-up-my-leg" crowd have been doing for years."

Voters were unanimous, however, in one critique:

"We all thought that skinny black guy on the stage was annoying and kept interfering in the debate between Romney and Crowley." said Sheila Crow, from Boca Raton, Florida. "He did a lousy job, and we're going to ask him not to come back."