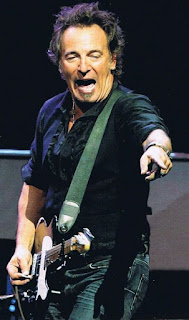 It looks like Obama fanboy Bruce Springsteen is just another rich liberal hypocrite. He claims he's for the rich paying taxes, then he skips out on a big chunk of the property taxes on his massive estate in New Jersey.

“The biggest problem we have now is almost 10 percent unemployment, but we also have the disparity of wealth,” Springsteen told London’s Sunday Times. “You can’t have an American civilization with the kind of disparity of wealth we have. It will eat away at the country’s heart and soul and spirit.”


Now, all this would be just fine and dandy. But there’s one small problem with Springsteen’s anti-tax-cut posturing: the man is a first-rate tax evader.

Bruce Springsteen pays over $138,000 a year in taxes for his three-acre home in Colts Neck, New Jersey. He owns another 200 adjoining acres. But because he has a part-time farmer come and grow a few tomatoes (organic, of course) and has horses, his tax bill on the remaining 200 acres is just $4,639 bucks. Do the math. By being a fake farmer, the working-class zero Springsteen is making a mint by robbing New Jersey of the antipoverty program funds he says they desperately need.

“I think it is unfair to our other property taxpayers that if you are a fake farmer, and that you don’t legitimately farm, that you are getting a property tax break and forcing your neighbor to pick up your tab,” said state senator Jennifer Beck. “That was not the intent of the law. It’s a violation of the public trust.” When Fox 5 New York reporter Barbara Nevins Taylor asked a lawyer for the trust that owns Springsteen’s land to comment on the Boss’s lucrative fake-farming tax breaks, predictably, the lawyer had no comment.

Great. The Boss skips out on his own property taxes so his middle class neighbors can pay more, while he's touring Ohio pretending he's for the little guy and demanding that the rich pay more taxes.

My wife and I are big fans. We still love his music. But he's fallen prey to the limousine liberal syndrome.