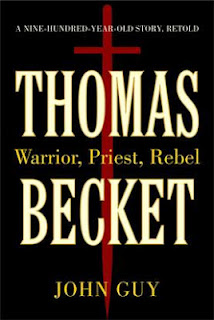 John Guy has a fine new book on St. Thomas Becket, who was martyred by agents of Henry II in 1170. Becket is a martyr to the ages-long struggle between the absolute power of the state and the rights of the Church and of the faithful.

Excerpt from Samuel Gregg's review of the book:

The significance of religious liberty—and, more particularly, libertas ecclesiae—for freedom more generally has been well-understood for centuries. The famous words recorded in the Gospel of Luke, “render to Caesar what belongs to Caesar—and to God what belongs to God” (Lk. 20:25), were revolutionary in their implications for how the West subsequently understood the nature of government. No longer could the state claim the divine characteristics with which it was invested by the pre-Christian pagan world. Instead the state—and its rulers—were now, like everyone else, sub Deus. Moreover, the Greek phrase for church, ekklesia, comes from combining the word kaleo (to call) with the prefix ek (out). This particular aspect of Christianity irked the Roman authorities so much that they accused the early Christians of atheism. Why? Because to belong to the Christian church meant that you were a member of a community which respected the state’s authority but did not practice the religion of the state.

With the paganization of American society (we even worship our own Molech), we Christians need to stand up against the state and refuse to do evil. The pressure to acquiesce to our current iteration of state religion is mounting rapidly, and Guy's biography of St. Thomas Becket reminds us of our responsibility to defy the paganism of unjust state power.

The book looks like a great read. I just bought it on kindle.
Posted by mregnor at 12:00 PM