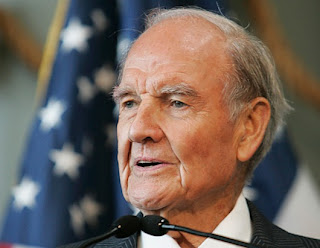 Former Democratic Senator and presidential candidate George McGovern died today. He was characterized in 1972 as the candidate of "Acid, Amnesty, and Abortion", and not altogether unfairly. He was a strong opponent of the Vietnam War, in which he may well have been right, but like most opponents of the war he failed to acknowledge his undeniable contribution the communist holocaust that followed our withdrawal. Sometimes even people who argue for a defensible moral position fail to acknowledge the moral ambiguity of the outcome of their choices.

I was not a supporter of the man, as you may have surmised, but he did have an admirable libertarian streak that got more pronounced as he aged.

He was an honest and decent man, and he served our country with integrity. He meant what he said, and he did his best by his own lights.

Please pray for him, and for his family.
Posted by mregnor at 1:20 PM