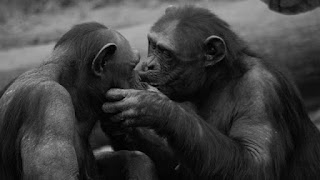 "The evolution of kissing":


So how did humans make the leap from mouth-to-mouth feeding to full-blown makeout sessions? That's less clear — but scientists are on the case. Philematology (the science and study of kissing) is becoming an increasingly popular area of study, as researchers strive to sort out the mysteries of love and attraction. Sheril Kirshenbaum, science writer and author of The Science of Kissing, describes one of the more popular hypotheses to be floated in recent years:

A kiss puts two people in very close proximity. Our sense of smell allows us to pick up subconscious clues about the other person's DNA or reproductive status. Biologist Claus Wedekind found that women are most attracted to the scent of men who have a very different genetic code for their immune system in a region of DNA known as the major histocompatibility complex. Pairing off with a male who has a different set of genes for immunity can lead to children that will have a higher level of genetic diversity, making them healthier and more likely to survive.

So Sleeping Beauty woke up when the Handsome Prince kissed her because she smelled his different histocompatibility complex DNA and wanted children with a higher level of genetic diversity who would be more likely to survive.

Unlike her, evolutionary science never sleeps.